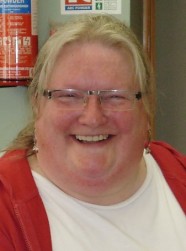 Linda spent the first part of her life in West Lothian. She became a Christian at a young age, and joined the Baptist family after her baptism at age 15 in Broxburn Baptist church. She lived for a number of years in Penicuik and was involved in Dalkeith Baptist Church. She is now retired from paid employment as a Social Worker in a number of different fields. She moved to Peebles area in late 1985 and has been a member of Peebles Baptist Church since then. She was involved with children’s work for many years, and now unexpectedly finds herself involved in a lot of catering!