Rotavation – that’s what you need! 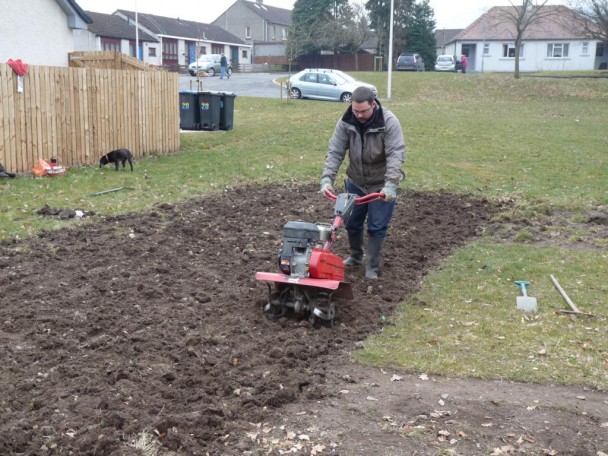 Out on the land again today with Bill and Rab, with cheese scones provided by Margaret, cheery banter by Fergus, and entertainment by Trig the dog, doing more preparation of the land in advance of the Big Dig on the 21st.

Last week’s turf lifting had been incomplete because of machinery failure, so we’ve modified the plan slightly. Rather than having two squares of land to work on, we’ll use the grassy rectangle in the middle of the test plot as a seating area. Or 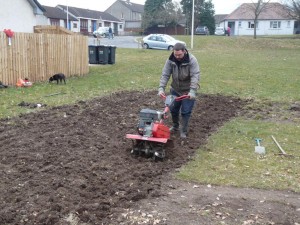 something like that. Of course, the plan may change another dozen times over the next few weeks…

Today’s task was to rotavate the soil, with the monster rotavator on hire from Ballantynes. Took some getting used to, but after a while we’d got it down to a reasonably fine art. The ground is full of fairly substantial rocks (especially next to the new houses, where we think the builders used our land as a temporary dumping site), so just getting the worst of those up while breaking up the soil was a major task. 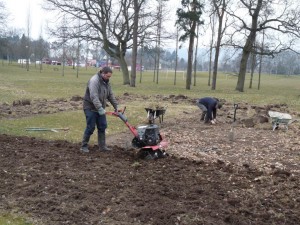 However, we’ve realised that we’ve got a more significant problem. Part of our land used to be (in days of yore) a curling pond, and when this was abandoned it was filled in with hard core, with a layer of topsoil on top. We knew that. What we didn’t know, and for some reason didn’t check on earlier, is that the topsoil layer is only about 2-3 inches deep. Hmmm.

Ironically, the ground that was most full of stones (next to the new houses) appears to have a deeper layer of topsoil, so that may still be ok for Bill’s tatties. As for the rest, we’ll need to do some brain storming to 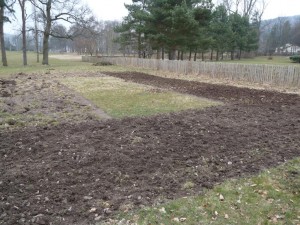 come up with a solution. Flowers might be ok, but for vegetables and anything else that grows deep we’re going to need some radical solutions. A lorry load of topsoil? Raised beds? See if the council can provide loads of compost for free? Get a few dozen horses to graze the grass for a few weeks? If you’ve got any bright ideas, let us know…

Anyway, the test plot is now beginning to look like it’s going to be a garden. I think we’ll be out again next week – come and join us on Wednesday from 10!