Who is on the Lord’s side? The Gas Board are, apparently.

We were out on the King’s Meadow this morning, digging holes for posts for the raised beds. Or at least, we were trying to dig holes. The hardcore lying under the surface makes scratching anything deeper than 3 inches a major challenge.

“What we need,” I said to Andy as we sweated away with spade and pickaxe, “is one of those mini JCBs. Wouldn’t it be great if the council turned up with one to do some work in the park?”

Ten minutes later, Andy nudged me. “Ian…” he said in a slightly confused voice, “what’s that all about?” I turned around to see what he was pointing to – a van towing a mini JCB, just driving into the park beyond our land.

It wasn’t actually the council – it was Scotland Gas Networks, in the form of Ryan and Mark, who were most amused by the idea that Jesus might have arranged for them to be at that particular spot, at that particular time, on that particular day. So amused, in fact, that as soon as they’d finished what they were supposed to be doing they drove the JCB over and dug twelve neat post holes for us, quick as a flash. Thanks guys! 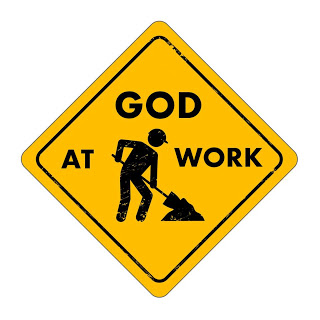