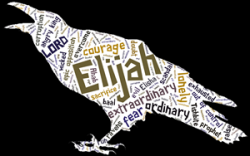 We’re coming to the end of our series on Elijah, although there are more parts to his story that we’ve not had time to look at (read the end of 1 Kings and the beginning of 2 Kings for yourself). But today as we say goodbye to Elijah, we’re saying hello to his successor, Elisha.

Elijah 8: Prophet on the run

In our series on the life of the prophet Elijah we’ve reached 1 Kings 19. Elijah is on the run again – it looks like his victory over the false prophets of Baal hasn’t resolved matters in quite the way he must have hoped, and the queen is after his head. How will Elijah deal [ more… ]

Elijah 7: Prophet on his knees

Two weeks ago we left Elijah at Mount Carmel after his dramatic and overwhelming victory over the prophets of Baal. He might be feeling like a rest – but there’s still plenty to do, because although God has promised that the rains will return and bring an end to the drought, it hasn’t actually rained [ more… ]

It’s the big showdown for Elijah! Today in our series looking at the life of this famous Old Testament prophet, we’re looking at 1 Kings 18:16-40 – Elijah’s confrontation with the prophets of Baal on Mount Carmel. With odds of 850 to 1, it doesn’t seem to be a very fair fight…

All through our study of the life of Elijah, it’s felt like Elijah is the only person in Israel still faithful to the Lord. But it turns out there are others – including a very high ranking official by the name of Obadiah, who we meet today. More to the point, Elijah meets him, and [ more… ]

We’re in the middle of a teaching series on the life of the prophet Elijah. Elijah has been staying with a widow in the town of Zarephath, where last week we saw God miraculously providing for them. But today as we reach 1 Kings 17:17-24, it seems like everything goes wrong again.

In our series on the life of the prophet Elijah, our hero has delivered God’s promise to King Ahab that there would be no more rain in the land until further notice. Now Elijah has been sent by God to hide by the brook at the Kerith ravine, cut off from everyone, with catering laid [ more… ]

We’ve just started a new teaching series on the remarkable life of the prophet Elijah. Last week we stopped just as Elijah had burst onto the scene and delivered his one sentence threat from the Lord to King Ahab – “the country will have no more rain until I say so!” So what happens next? [ more… ]

Elijah 1: Standing in the Gap

We’re starting a new teaching series on the life of one of the most colourful, provocative, charismatic characters in the whole of the Bible – the prophet Elijah. He’s an extraordinarily enigmatic figure, and yet is at the same time profoundly human – full of very normal human doubts and fears and emotions. But whatever [ more… ]